How to silently install LexisNexis InterAction 6.21.21

I recently had some issues specifying server data for my LexisNexis Interaction silent install. For some reason, the server information that I used was not applying during the install. After a few failed attempts, I decided to review the MSIEXEC logs and found the following lines:

According to the logs, it looks like the server information that I added was getting deleted because of the SetDBServerSRCH action.

Now that I found what was causing the server information to be removed, I decide to review the InterAction MSI table and search for the SetDBServerSRCH action. Once I found the action, I was able to locate the condition that was forcing the action to run.
Condtion:
IANETINSTALL=0 and UILevel<5

After a few tests, I verified that you can specify server information if you make the condition false. So all you have to do is add the following to your MSIEXEC command:
IANETINSTALL=2

And for anyone lazy enough to not read everything, here is the entire silent install command for InterAction.
MSIEXEC /I InterAction Desktop Applications.msi IADBSERVER=”DB SERVER” IADBNAME=”DB NAME” IAPORT=”PORT HERE” NETAPPSERVER=”APPSERVER” IANETINSTALL=2 /qn

I hope this helps someone!

Recently, I decided to make a Powershell script that will make it easier for larger environments to uninstall and upgrade software. This is a continuation of the script that I wrote a while back ago that can find uninstall strings for 32 and 64bit applications (Link). Similar to the previous script, this script will automatically find the uninstall string for the specified program, but now it will also uninstall the program and install an upgraded version with the install file that you picked.

END_OF_DOCUMENT_TOKEN_TO_BE_REPLACED

Depending on your environment, you may or may not need to have prerequisites that need to be done before starting an upgrade. These tasks may include, disabling your antivirus or uninstalling any software that may not be compatible with Windows 10. Once you have automated these tasks you can start the Windows 10 upgrade process by using the following command:

This is a very basic way to silently upgrade your computers to Windows 10.  You can add further customization such as adding a post script that will launch after the upgrade is done.  To do this you can add the /PostOOBE<location>\[setupcomplete.cmd] switch to the command above.

Once you have your scripts ready, you can deploy them with the software that you use to push out your packages (Kaseya, LANDesk, SCCM, etc).

END_OF_DOCUMENT_TOKEN_TO_BE_REPLACED

If you are in an environment that has multiple versions of Flash Player, I would recommend using Adobe’s Uninstall Flash Player tool in your Flash Player install script. You can download the uninstall tool here.

Using the following line will uninstall any version of Flash Player that was installed on the computer.

Below is an example script that uninstalls and installs the latest version of Flash Player.

Here is a freebie for everyone that does not have a commercial license for Teamviewer. The package below is a silent install for Teamviewer 11 without the MSI!

How to silently install and uninstall Adobe Air applications 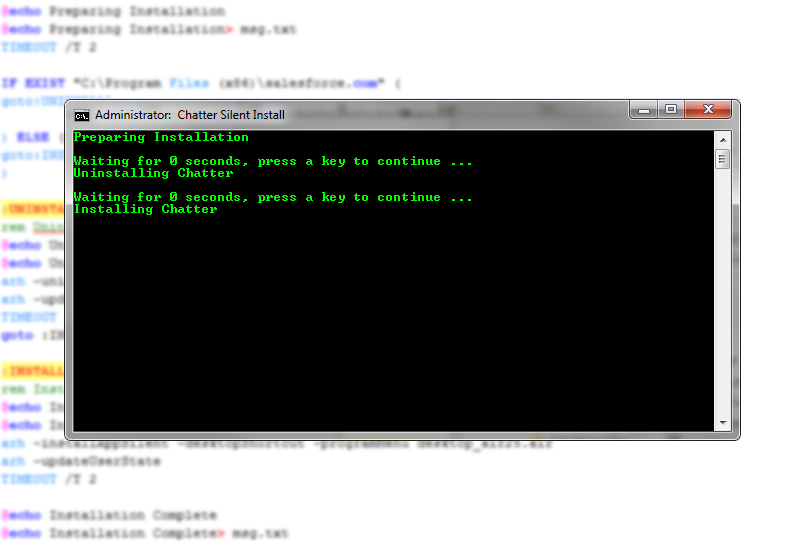